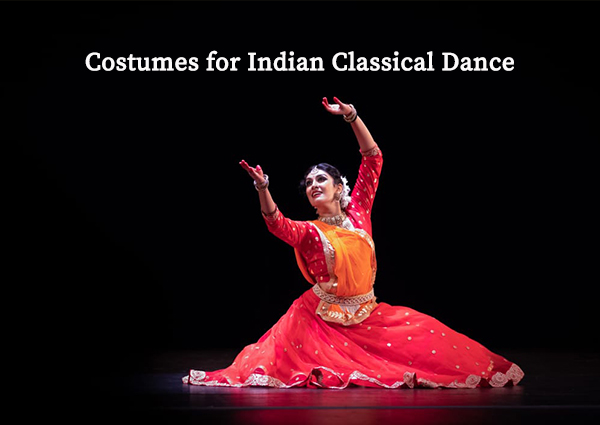 In the following, we will be discussing a very important topic that’s “Costumes for Indian Classical Dance” and will discuss it thoroughly within the article. Indian dance forms are as much about grace and skill as about presentation. The costumes, make-up, and accessories are a vital part of each of the traditional classical dance styles. The moves and expressions are enhanced and complemented by the outfits that shimmer and give a distinct identity to the dance form.

It is hence hard to imagine Kathakali without the elaborate yet distinguishing face make-up or Bharatanatyam without the perfectly pleated unmistakable drape. Interestingly, each of the dances also in many ways represents the region from which they hail. The costumes and get up are thus further identifications of not only the dance style but also the specific region that hones them.

Here is taking look at the most prominent Indian classical dances and their distinct attires and physical appearances.

Practiced in southern India, Bharatanatyam is one of the leading dance forms of the country. The costume of a Bharatanatyam dancer is made on the lines of a Tamil Hindu bride. A vibrantly colorful sari with a pleated stitched cloth in the front that fans out during leg and knee movements is the most eye-catching aspect of the attire. The sari is not a single piece but a combination of many cloth pieces of different varieties.

The sari is draped in a special way, where it tightly covers the back and crosses over one shoulder with the Pallava or the end of the sari held at the waist by a belt. The belt a jeweled accessory is complimented with jewelry on the nose, ears, neck and sometimes the head. The hair is tied usually in a tight bun or knot adorned with flowers or the gajra. The ghungroos beat away to the moves as the eyes are lined for highlight. The hands and feet may also be painted in kumkum red powder for better viewing of the gestures and movements by the audiences. The male costume consists of a dhoti which is usually stitched with rich silks and embroidery. The upper body is bare.

Kathak hails from three distinct regions, Jaipur, Lucknow, and Banaras. It is also a dance form that cuts across religions and is practiced by both Hindus and Muslims, with the dress varying for each. The Hindu Kathak dancer wears either a sari or a long full skirt that reaches the ankles. The sari is wrapped around the waist and its end hangs down from the left side. A blouse covers the upper body and a tika usually adores the forehead along with the customary jewelry in the ears, nose, and neck. The dancer may also wear an orange or scarf in some cases. The full-length skirt, on the other hand, is embroidered on the base and is a lightweight skirt that twirls with grace during dance movements. The upper body is covered in a blouse or choli that is in contrast colors to the skirt and a transparent scarf usually covers the head.

The Muslim costume also includes a long skirt but a close-fitting churidar is worn on the legs. Sometimes an overcoat is also worn to cover the hands along with the head or scarf. For male dancers, a silk dhoti around the waist is covered with a silk scarf tied on the top. The upper torso is either bear to show the Hindu thread or can be covered in a loose jacket.

Finding its roots in Kerala, Kathakali has one the most elaborate costumes. It takes more than a few hours for the dancing troupes to get ready before a performance. The colorful costumes, highlighted make-up and facial paintings make Kathakali popular amongst kids as well. The make-up is coded as colors represent the type of character that the dancers are portraying. Green (Pachcha) facial paints along with red lips are a depiction of Gods, nobles, and sages, such as Krishna, Shiva, Rama and more.

Red (Tati) is used for those depicting evil, such as Ravana. Black (Kari) is the color for hunters and forest dwellers. Sometimes demons are also painted black but with streaks of red. Yellow is for monks and noble men and women, such as Sita or Panchali. A white beard represents the one with a virtuous conscious such as Hanuman. The make-up and colors represent the virtues of the characters and the dance form combines the colors to give deeper meaning and understanding of the characters.

Odissi from Odisha is a wonderful dance form with costumes similar to that of Bharatanatyam. The sari is colorful and made from the local silk called Pattasari. There are pleats in fronts that are stitched to the garment for greater flexibility but the saris have prints and designs that are traditional to the local handicrafts and culture, such as the Sambalpuri and Bomkai sari. Silver ornaments are worn more since it is a more localized metal covering the ears in what is called kappa that decorates the side of the head too.

Necklaces and armlets called baseband are worn on the upper arm. At the waist, the jeweled belt is worn to hold the sari and the hands and toes may be colored in red dye called Alta. The dancer’s head is also well decorated with allaka a headpiece and the hairstyle usually is adorned with a moon-shaped flower bun or sometimes a mukoot with peacock feathers. Male dancers wear a pleated dhoti and the upper body may be bare. Sometimes a translucent wrapping over one shoulder is also worn.

From Andhra Pradesh, Kuchipudi traditionally was performed by male dancers. A dhoti pleated in front was the main costume of the male dancer whereas; the female dancers wore a sari with light make-up.

However, in modern times the female costume has been drafted along the lines of the Bharatanatyam attire with a pleated sari that is held on the waist with the jeweled belt.

The hairstyle varies, though in both dance forms flowers are worn as ornaments over the head. Yet, some Kuchipudi dance performances may include different costumes, such as pots over the head, gymnastic dancing or head sheets depending on the characters that are depicted.

Originating in Assam this dance form has seen a gradual change in costume over the years. Traditionally the attires were made from raw silk and velvet was used. Over the years with more performances over the stage, the material of the costume has changed, yet continue to include pat silk produced in Assam, as well as, hand-woven materials with localized motifs. The costumes also vary on characters, such as the Sutradhar Nritya is characterized by his white costume and turban or Krishna with yellow and blue attires.

Traditional jewelry is also used in this dance form, such as gold made from the Kesa Sun technique. The Kopali on the forehead, different necklaces, bracelets, and differently shaped pendants are characteristic of this dance. In the case of Ankiya Naats or dramas, masks or mukha are worn by the dancers. The mask and turbans are beautifully made by local artisans. The male costume comprises of a dhoti and chadar and the female attire consists of the ghuri, chadar and waist cloth called Kanchi.

From Manipur, this dance form has a distinct costume. Dressed as Manipuri brides in the Kumil costume the dancers wear a cylinder-shaped long stiff skirt. The decorations on the barrel-shaped skirt are exquisite using gold and silver embroidery. On the upper body, a velvet blouse is worn and the head is covered in a translucent veil. Though jewelry is worn around the neck, arms and ears, the Manipuri dancers do not wear anklets. The male dancers are dressed in dhoti that is pleated and tied around the waist.

This dance form is recognized by its white or off-white saris that are embroidered with gold brocade. Originating from Kerala, the dancer also wears a similar color-coordinated blouse with the pleated sheet in front and the waist adorned with a jeweled band. The jewelry is simple and there are no masks as seen in Kathakali. The hairstyle is that of a bun on one side circled by the gajra.

The different classical dance forms are thus identified by the layman through their costumes and outward appearances. There are, of course, varies differences in style, grace, storytelling, music, and moves. Yet, the attires are the most striking way to identify each dance form and also get a strong sense of the region and cultures that they belong to.