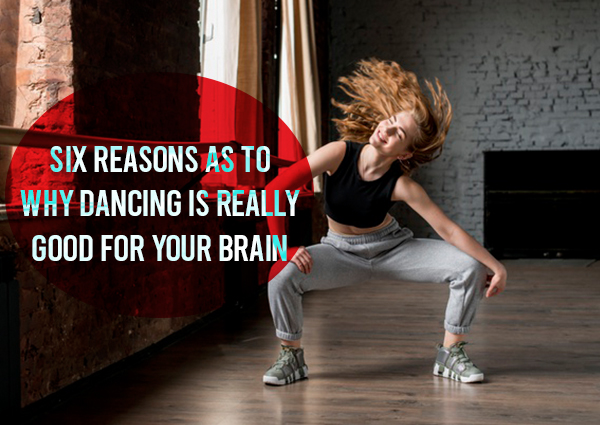 In the following article we’ll talk about a crucial topic that’s “SIX REASONS on WHY DANCING IS REALLY GOOD FOR YOUR BRAIN” lets discuss about it:

When we talk about Intelligence, it is nothing but the ability to actually make good decisions really quickly. One effective way to actually become more intelligent is to participate in activities that demand split-second decisions. Dancing is actually a perfect example of this—it’s a fast-paced activity that forces your brain to quickly decide which way to actually turn, how to move, and just how to react to those around you.

To put it simply, the essence or basics of intelligence is decision making. Furthermore to improve your mental acuity, it’s best to involve yourself in an activity that demands split-second, rapid decision making. Dancing is actually an example of a fast-paced activity that further demands speedy or fast decision making. It requires instant responses to questions like Which way to actually turn? What speed to actually move your body? And just how to react to your partner’s movements? Dancing is an amazing way to maintain and enhance your intelligence.

The more complex or complicated your neural synapses are, the better your memory actually is. Learning anything new, like choreography to a dance routine, is an effective and efficient way to create new neural pathways. As a result, your brain has a easier and better time accessing stored information and memories, like names and places.

No one can deny that there are both mental and physical aspects of dance lessons. You physically exert yourself, which further requires strength and stamina, and you remember choreography, which actually calls for a good memory. Muscle/Motor memory is actually the connection between these components. In fact, the method or process of “marking” a routine—walking through the movements—is actually an effective method of encoding choreography. This further allows dancers to repeat the moves with greater fluidity once they perform them full-out.

As with other sorts of physical exercise or workout, dancing releases endorphins, a brain chemical that provides you a “runner’s high” after working out. However, dancing may actually have an even stronger effect on the mind. After all, moving your body to great music is enough to actually boost your spirits. Then, there’s the sense of satisfaction that actually comes from working toward as well as really achieving your goals.

Dancing Decreases the risk of Dementia

As a young dancer, you may really not be anxious or concerned about the cognitive decline of old age just yet, but a study published in the New England Journal of medicine states that dancing decreases the risk of dementia by 76 percent. Other physical activities like bicycling, swimming, and playing golf had no effect. Yet, dancing was even better for maintaining mental acuity than cognitive activities like reading and doing crossword puzzles.

Have you ever noticed how professional ballerinas can pirouette endlessly without getting dizzy? Research suggests that ballet dancers’ brains adapt to prevent or stop them from feeling dizzy. After years of coaching or training, they gain the ability or power to suppress signals from the inner ear that are linked to the cerebellum, making them quite resistant to feeling dizzy. If you actually have balance issues, rewiring your brain with dance lessons could help, even at the beginner level.